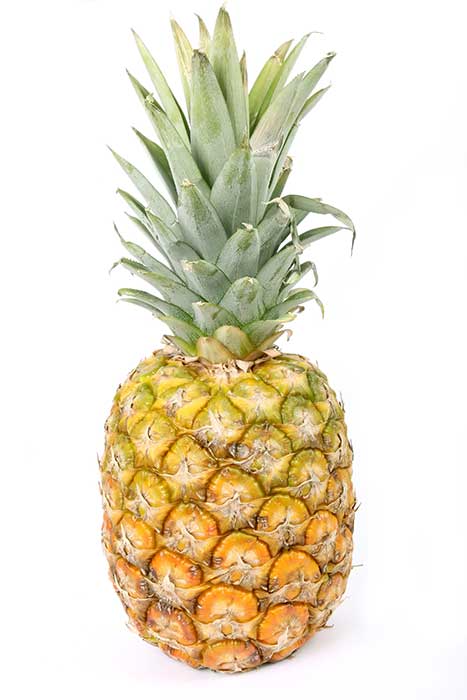 The MD-2 pineapple, also known as the Golden Extra Sweet, is of golden color along its outer crust and its external form is symmetrical, uniform, and aesthetically pleasing. Originally introduced in 1996 by Del Monte and the Pineapple Research Institute, the MD-2 pineapple has soared in popularity and its global demand has skyrocketed, due mainly to its organoleptic characteristics (i.e. great taste and smell), its high carbohydrate intake, and the contents of an enzyme that aids in the digestion of protein.

The MD-2 pineapple is recognized internationally for its great aroma, exquisite flavor, high vitamin C contents, and low acidity. This variety of pineapples contain B vitamins, sugars, water, and fiber. The nutritional composition of the MD-2 pineapple varies according to climate conditions, soil, crop management, fertilization, and handling and processing after harvest. However, the caloric value of the MD-2 pineapple is moderate despite its sweetness.

When originally introduced, it became apparent that the MD-2 pineapple is more aesthetically pleasing than other varieties, such as Smooth Cayenne. The MD-2 pineapple has an attractive yellow color and is somewhat more square-shaped than the Smooth Cayenne, so it is easier to transport and display. The MD-2 has gained large popularity and acceptance in western European markets. Growers in Central America,including Panama, benefited from major distributor chains in Europe and other western markets began demanding MD-2 pineapple, mainly cultivated in Costa Rica and Panama.